Let's begin with the obvious. After years of listening to me insist that "it's not an empty nest, it's a successful launching pad," my children have proved that it really doesn't matter what I call it, the result is the same: an empty house. The birds have flown, Entropy Academy is no more.

Actually that's not strictly true: Andrew, our second-born of six, is still at home.  He lives in the guest house with a pool table, a really basic sound system, and kind people who come every weekday to do his laundry, make sure his personal hygiene is up to snuff, and take him on bus rides to Ventura.  Usually, he eats with us. Andrew is 28 years old, and has Down's syndrome.

The fact that I home schooled all six of them makes the silence all the more poignant. The house is no longer subject to quite the ravages of entropy that gave our school its name . . . oh, but how could I forget those power houses of chaos, our two rescue Great Danes!  Frobe (two syllables please,) named after the illustrious Sir Martin Frobisher (about whom more anon,) and Persephone of Greek myth, shortened to Percy.  Imagine two enormous toddlers, combined weight 200+ lbs, laying waste to your living room with total abandon, and you'll get the general idea. 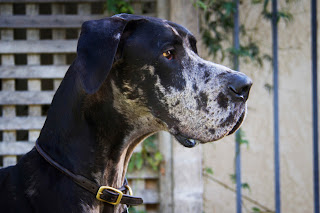 I came to America when I graduated from Oxford, on a teaching fellowship in the music department of UCLA, with the firm intention of spending absolutely no more than one year maximum away from home.  That was in 1978.  In the immortal words of Rabbie Burns, "the best laid plans o' mice an' men gang aft agley" - that's Lowland Scots for "don't work out terribly well."  I did get my Master's, in the history of Mediaeval music.  This means that I once knew a tremendous amount about the clausulae of the 13th century Notre-Dame School.  It also made the choice between career and family most excessively easy: there were no more jobs for mediaeval music historians in the early 80's than there are today.  So I poured all my creative energy into homeschooling and converting to Catholicism, and for over twenty years I was fulfilled.  Driven more than halfway to insanity, to be sure, but fundamentally, deeply happy.

Then came the thing that would forever set me apart from most "successful launching pad-ers" (no, I'm not expecting it to catch on either): I developed a neurological problem of uncertain origin, "atypical Parkinson's" being about as close to a diagnosis as I can get.  This is why all my typing is one-handed, why the piano stands silent (I graduated from the Royal College of Music in piano, and  was looking forward to long hours practicing when the children grew up.) Virtually housebound, I have to find ways to keep the old grey matter from atrophying.

I have lengthy conversations with the dogs, have been known to read aloud to the hummingbirds, but there are still hours of every day to fill. It is my newest, and greatest, challenge - physical, intellectual, emotional and spiritual - and I invite you to join me: to keep me company, share a good story, and crack a joke or two along the way.
Posted by Alison at 7:51 AM