Philistines in the Kitchen

What would be the most frightening thing you could find in your kitchen first thing in the morning? For Andrew, the answer is simple: Philistines.

No, Andrew does not mean those who find Beethoven's late quartets impenetrable, or the poetry of Dylan Thomas; he means honest-to-goodness, armor-clad, heathen villains who threaten his family home, and must therefore be dealt with most severely. The intensity of Andrew's hatred is not in the least fazed by modern research suggesting that the Philistines were actually cultured and sophisticated—more so, some say, than their arch-enemies, the Israelites. For Andrew, they remain the archetypical bad guys.

I sometimes wonder whether Andrew's sense of personal history isn't as open to figures from the past as the present; whether Howard Carter's astonished cry, "Wonderful things!" as he opened Tutankhamun's tomb in 1923 isn't as real to Andrew as the bus driver's cheery morning greeting.  For many years, his beloved companion was a book about the Terracotta Army, the collection of military sculptures designed to protect Qin Shi Huang, the first Emperor of China, in his afterlife.  Questioned about the figures, Andrew would put on his most terrifying fighting face, and vividly demonstrate "warrior moves" entirely of his own invention. Which, in retrospect, look a lot like his Philistine-fighting moves. Or his fury when a fork gets stuck in the silverware compartment of the dishwasher.

Few articles about people with Down's syndrome talk about teens or adults; they tend to focus on either how cute their less-than-ten-year-old is, or how brilliantly she is doing with her early intervention education.  Yes, the photos are adorable, and yes, it is remarkable that at six, she not only speaks English clearly but is learning Mandarin Chinese along with her kindergarten peers.

At the other end of the spectrum, yes, it's wonderful that your 30-year-old is a world traveler and has written a book (even if he did dictate it, I'm still impressed.)

By these criteria, Andrew (28) is nothing to write home about.  He doesn't speak clearly, seldom strings together a coherent sentence of even three words, and remains completely unimpressed by the need to clean his teeth, tell time, or keep track of money.  At Mass, he is noisier than all but the most vocal baby, with his almost infinite repertoire of clicks, grunts, and snorts. "Andrew," I tell him, "you need to be quieter.  People will think you're weird."   He looks stricken.  "Oh," he says, "sorry-sorry-sorry."  And keeps right on doing it, volume unabated. It's hardly surprising that most people do think he's weird.

But go with him onto his own turf, and it's a different matter.

Not long ago, a friend visited from England.  Megan zoomed right in on Andrew's wavelength; the two of them got along like a house on fire. Next morning, we picked Andrew up from the Ojai Enrichment Center where he spends his days, and took him to get an Italian soda at the Bohemian Coffee Shop.  The second he walked in, the place lit up like a Christmas tree.  "Andrew! Good to see you!  How've you been? Is this your mom?  Hello, Andrew's mom! You say your friend's from England? Hello, Andrew's friend from England!"  His body language softened: he positively glowed. It was like being with a movie star.

Megan asked him to take a picture of us: the camera wouldn't shoot.  He handed it to Megan saying, as clear as can be, "The memory card's full." Blow me down, it was! Whether he had read the instruction book (as he later told his dad), or had simply overheard someone, somewhere  complaining about their memory card being full, didn't really matter; either way, it was a show-stopper.

People who love Andrew aren't impressed by his knowledge, his vocabulary, or even his fighting moves. They simply recognize in him, as did Jesus in Nathanael,  "an Israelite indeed, in whom there is no guile".  It's who he is, not what he does, that matters.

But I'm still glad he's around most mornings—just in case the Philistines decide to show up. 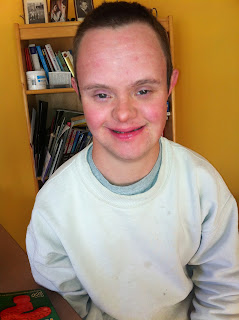 (This is as close to a Philistine-fighting face as he could muster this morning.  There—is he not adorable?)
Posted by Alison at 9:25 AM