Aldous Huxley and the Birds

It was the goldfinches that did it—brought Brave New World to mind, that is. Goodness knows it had been long enough since I read it, somewhere in my teen years, but as I watched the goldfinches’ antics that afternoon, Aldous Huxley’s masterpiece came flooding back. You see, it rapidly became apparent to me that there is a wide variation among goldfinch IQs, as revealed by their efforts to get seed from their new feeder.

The ingenuity of this feeder lies in its construction: a clear plastic cylinder full of thistle seeds, with dowels inserted at intervals for perches. The trick is that the feeding holes are cunningly positioned beneath the perches, thus requiring the birds to hang upside down if they want to get at the good stuff. (This also keeps the less acrobatic common house finches at bay.) It had never occurred to me that goldfinches are not created equal (to be perfectly honest, I’d never given the matter much thought), but as I watched their efforts, I found my thoughts returning again and again to Huxley’s dystopia and its rigid caste system.

Alpha birds cottoned on straight away, inverted themselves and started feeding with enormous gusto—so much so that, in a vivid demonstration of trickle-down economics, showers of seeds cascaded to the ground beneath. (Note to self: purchase donkey to eat volunteer thistle plants next spring.)

Betas lacked the executive initiative of the Alphas, but learned by watching and soon were imitating them successfully.

Gammas were by far the most entertaining: they swung round in a complete circle, grabbing a seed as they zoomed past the hole. Sometimes the speed of a revolution would fling them completely out of their orbit, and they would flutter back to their perch with an indignant flurry of wings.

Deltas were a mixed bunch: some sat upright on the perch, tapping disconsolately at the seeds they could see but never reach, while others perched atop the hummingbird feeder and simply looked puzzled. They could tell there was food in there, but it was strange food, not a bit like thistles, not at all, at all … 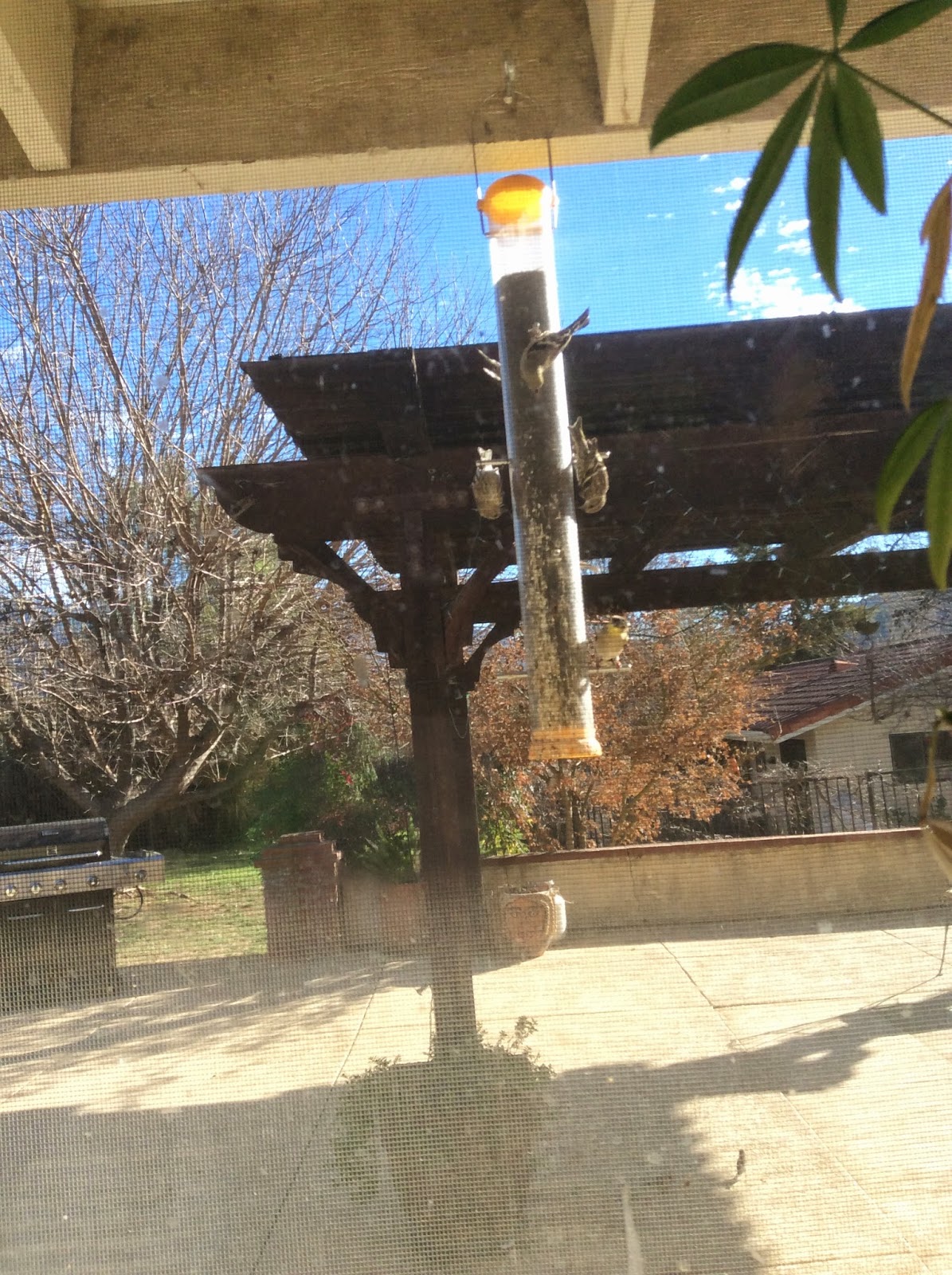 Meanwhile, the Epsilons hopped around beneath the feeder; every now and then, as if by magic, a small flurry of seeds fell from above—in many ways, they did better than their brainier counterparts perched on high. I would have ranked them higher had it not been for Pyga, the cat. Any avian plan for life that does not take the cat into consideration is, unfortunately, doomed to failure.

The tremendous range of goldfinch IQ shocked me; as my mother might have said, slipping into her native Scots brogue, “fa wid hae thocht it?” (whoever would have thought it?). And yet, none of them is any more a goldfinch than another, and all are equally beautiful, give or take a few ruffled feathers. Given equal opportunity, some outperform others—just like humans.

But whatever their performance, whether Alpha, Gamma or Epsilon semi-moron, every one of those finches is beautiful; every one is necessary; every one is valuable.